The LED flash on your iPhone 14 doubles as a flashlight, so you can get extra light when you need it. So you can use it to light up your way anytime any day. There are some ways you can turn your flashlight on or off. You can either ask Siri, or you can use Control Center on an iPhone with Face ID. 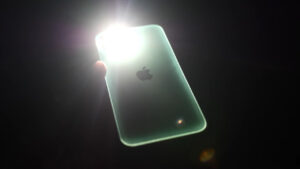 Here is a perfect one you can use to turn On your flashlight on your iPhone 12 series via Ask Siri. Just say either of the following words.

Step 1: Swipe down from the upper-right corner to open Control Center on your iPhone 14.

Why does my flashlight keep turning on iPhone 14?

One of the reasons your iPhone flashlight keeps turning on itself is that you are accidentally touching the flashlight icon on the lower left of the screen with your thumb or palm. This can be annoying as the flashlight will keep draining your device’s battery life.

You can do this by going to Settings > General > Accessibility > Turn off Tap to Wake. However if the flashlight is on because of the accidental touch of a hand, just swipe to the left very slightly from the lock screen to turn it off. Another way is to ask Siri to handle the task. Just say “Hey Siri, turn off the flashlight,” or “Hey Siri, disable the torch. Or “Hey Siri, flashlight off,” and “Hey Siri, torch off.”